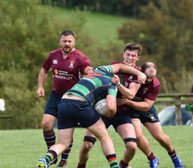 Enniskillen 1st XV were left reeling on Saturday after suffering a heavy home defeat against a clinical Clogher side, ending in a 0-33 whitewash. The game was a tighter affair at times than the scoreline may suggest as it featured long periods of the typical war of attrition style rugby we’ve come to expect from a Skins/Valley contest; but, while Skins came away with nothing all too often after threatening the try line with repeated carries from the likes of Neil Rutledge and Kaine Holden, Valley exploited space out wide with deadly accuracy to score three tries in the first half and leave the home side chasing the game early on.
To Skins’ credit they adjusted to Valley’s expansive play eventually and closed the floodgates for most of the game before leaking two more scores in the final quarter, a huge defensive performance from the back row of Michael Rooney, Jack Rutledge and James Carleton helping slow the momentum. In attack however the Skins backline never really got a chance; the centre pairing of Stephen Balfour, and recent standout Connor Keys at 13, broke the line on occasion but didn’t see enough ball to build momentum.
Skins will be sore after this heavy blow but it could be a positive force for improvement at this early stage of the league. The young and hugely changed side have a lot of individual ability and must look at building some team cohesion through this league season. They face another tough test this weekend as they travel to Dromore, a top league side in recent years.